This week's artist is Faith Johnson who drew a portrait of one of our regular library patrons named Jill. Jill loved it some much she encouraged Faith to submit it to the blog so here it is! Isn't it beautiful?

Posted by Teen Services at 3:41 PM No comments:

Congratulations to Clarissa Jones for being our featured artist this week! This is her super Kawaii tribute to the anime Dangaronpa! We love it! 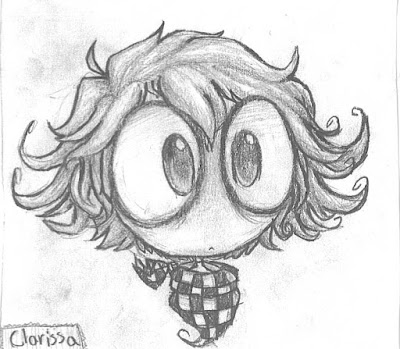 More new books have just hit our shelves at the Yuma County Library and here are three that we think are definitely worth checking out!

The Gilded Wolves by Roshani Chokshi: Best-selling author Roshani Chokshi offers up the beginning of a brand new series. In the Paris of the late 1800's, treasure hunter Severin Montagnet-Alaire has just been offered the chance to claim his inheritance by member of a powerful secret society - the Order of Babel. But in order to succeed he must team up with a group of gifted misfits and try to stay alive long enough to find a mysterious treasure the Order needs. If you liked Court of Miracles or Six of Crows, this one is for you.

Let's Go Swimming on Doomsday by Natlie C. Anderson: Abdi is a 16 year old living in Somalia and trying to live a normal life. That all changes when his family is kidnapped and Abdi is forced to become a child soldier by the kidnappers, a terrorist group known as Al Shabaab who train him to become a suicide bomber. He manages to survive and escape only to become a homeless fugitive, hunted by both Al Shabaab and the police. The book is not for the faint-hearted, but it will definitely keep you gripped from start to finish.

The Lying Woods by Ashley Elston: Owen Foster has always been a privileged rich kid, growing up in New Orleans and attending all the best schools and going to all the best parties - until the day he learns his dad is a crook , and all the money his family has was being embezzled from his dad's company. His dad disappears before he can be brought to justice and now, in his Senior year of High School, Owen has become the most hated kid at his school, has had to get a job for the first time in his life, and what's worse, someone his dad ripped off wants Owen and his mother dead.

To find these books at your nearest library branch, click on the titled for a link to the library catalog. And stop by your closest library's teen room to see what else is on the shelf!

Thank you so much to Jula Setchfield for her beautiful pencil drawing. She didn't give it a title, but we think this is an original character. We love it! Great job Julia!